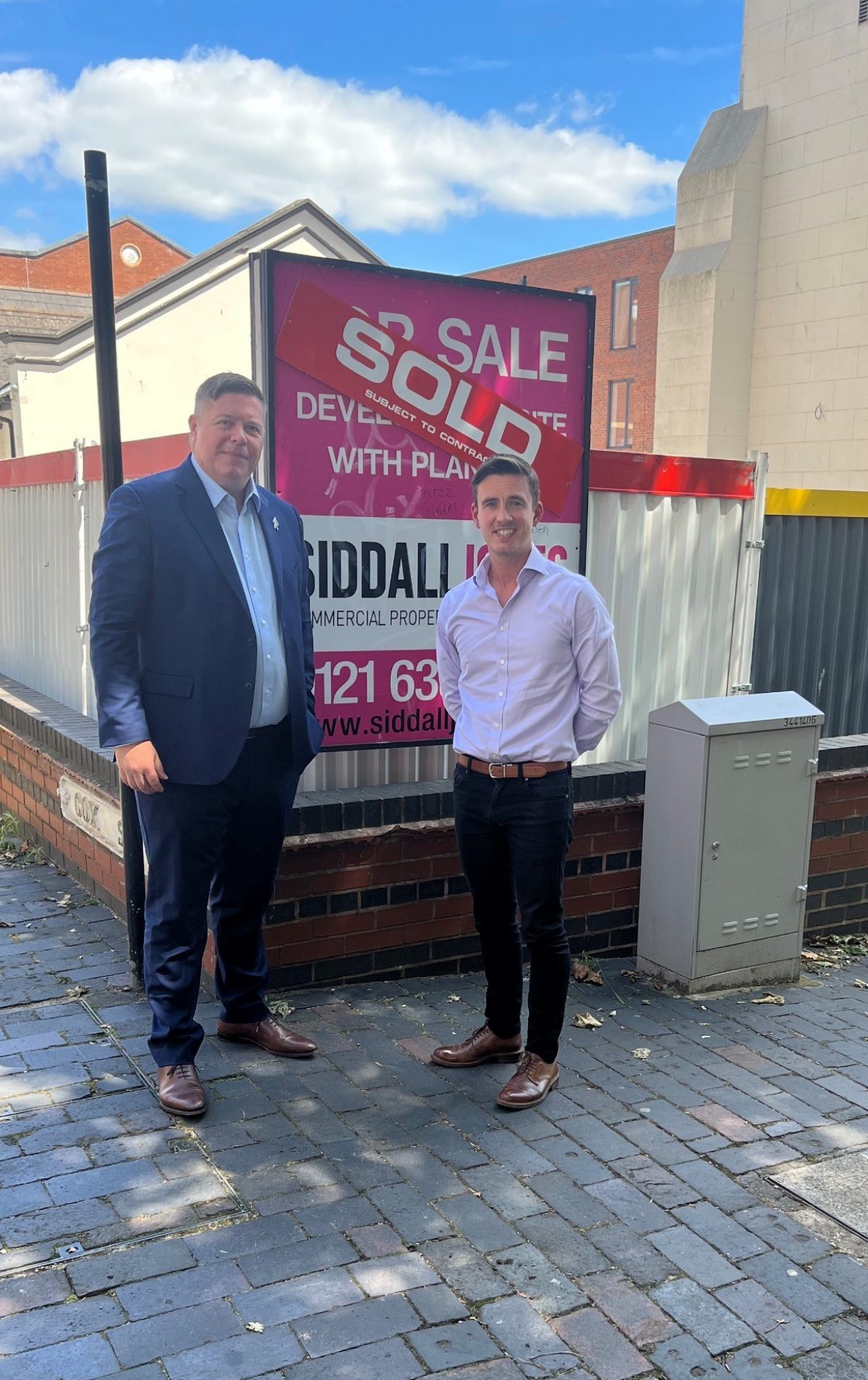 Birmingham’s top commercial agents Siddall Jones have announced the sale of the last remaining plot of land in a prime Jewellery Square location in Birmingham to one of the country’s leading SME property developers.

Stripe Property Group, which has offices in Newcastle-upon-Tyne and Birmingham, has already made a number of strategic investments within Birmingham, contributing to the considerable regeneration of the city in recent years.

The group’s most recent acquisition, for £700,000 via Siddall Jones, is the development opportunity on the corner of St Pauls Square, adjacent to Henry Wongs restaurant, which will add an additional gross development value of £2,750,000 to its portfolio.

The site has planning permission for a four storey building, including retail or commercial use on the ground floor with four large, luxury two bedroom apartments on the three floors above.

“We received keen interest from a number of local and national developers, and I am delighted that Stripe Property Group was successful and will take this key site forward.

“Stripe Property Group has acquired a prime development site in one of Birmingham’s most desirable addresses with far reaching views over St Pauls Square as well as being within walking distance of the city centre and Jewellery Quarter.

“The scheme, which was developed by The Space Studio architects and designers, retains the industrial heritage of the location while drawing on modern architectural features with plenty of space and natural light.”

Managing director of Stripe Property Group James Forrester said: “Our latest acquisition has been just one in a string of strategic investments designed to bring quality commercial and residential development to the heart of Birmingham.

“The city has undergone a huge level of regeneration in recent times and our aim has always been to compliment the changing face of Birmingham by delivering high quality real estate, designed for local businesses and residents alike.

“The site on the corner of St Pauls Square will certainly help achieve this and we are now ready to bring our vision for this plot to fruition.”

The apartments offer 1,216 sq ft of living space with the ground floor offering 861 sq ft in a total of 4,509 sq ft. There is also an individual bicycle store on each floor for each apartment.

St Pauls Square is recognised as one of the most desirable residential locations close to the business quarter in central Birmingham. It has easy access to the city centre’s retail and recreational facilities and is a short walk to the Metro, and Birmingham Snow Hill and Birmingham New Street railway stations.

Siddall Jones, which has offices in Birmingham and Dudley, was launched by Ed Siddall-Jones in 2012 and has grown steadily from one office to two and from one member of staff to six. In 2020, the firm was named Most Active Agent in the West Midlands in the Radius Data Exchange survey produced in conjunction with EG, the commercial property market magazine. In 2019, Siddall Jones was named Most Active Single Branch Agent by number of deals done by CoStar and was a Top Five finalist in the overall CoStar awards. In 2022, Siddall Jones was named the top commercial agent in the West Midlands in the EG Radius On-Demand Rankings. The firm brokered 156 deals including sales and lettings in 2021, almost double the number of the nearest rival.

Stripe Property Group is a UK property developer focusing on student and residential developments in the North East and Midlands with 20 years’ property experience.

James Forrester has worked within the property industry for 20 years, born and bred in Newcastle and now residing in Birmingham, he has extensive knowledge of the local market, as well as the wider national market.

James is a director of Stripe Property Group, a company specialising in top-quality new-build developments in the North East and Midlands.

As a result, James has an unrivalled knowledge of the sales, lettings and new-build sectors, making him an accomplished, all-round property market commentator.