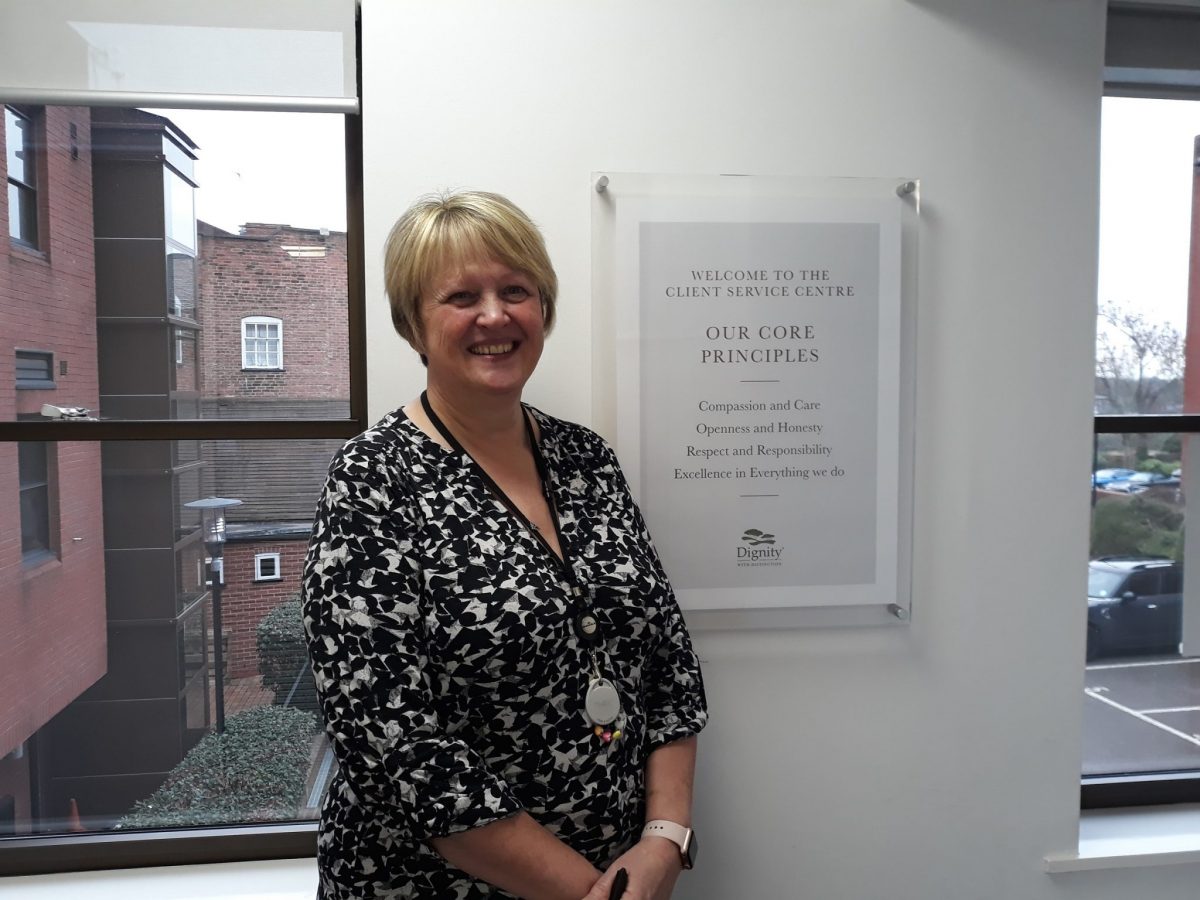 When Sue Cruxton decided to take on an apprenticeship to further her career with leading funerals business Dignity, she admits to having been a little apprehensive – instead of being in her teens or 20s like most apprentices, she was approaching her 60th birthday.

But Midlands training organisation PTP, part of the BCTG Group,  was so impressed with her performance that she is now among the finalists at this year’s Birmingham Apprenticeship Awards.

Sue had been working with Dignity since 2011, starting in the Client Services Centre (CSC) as an agent. PTP, (Performance Through People), ran the two year programme that saw Sue gain a Level 3 apprenticeship as a Learning and Development Practitioner and she is now applying her newly honed skills to supporting CSC colleagues, based at Dignity’s Sutton Coldfield head office, with their own training needs.

Sue Cruxton was familiar with the world of apprenticeships – she used one to get her first job after leaving school.

She said: “I’ll admit to being apprehensive about studying again after so long, but age should never be a barrier to achieving your goals.  I really enjoy learning and so I was happy to take on the apprenticeship.”

“The apprenticeship was recommended by my manager Annette Smith as a development opportunity. I was already a Learning and Development Specialist in the CSC but to that point I had been relying on shadowing other people and on the job coaching to build up my skills.  This was a way of accessing formal training and gaining a recognised qualification.”

Over the two years of the apprenticeship, 20% of Sue’s working week was devoted to studying and all the materials were accessed online, with a PTP assessor visiting her at head office.

Sue said: “We usually met once a month, but I could always contact the assessor if I had any queries.  My team were also really helpful, offering plenty of advice and encouragement.”

Her PTP tutor Maureen Begum was so impressed with Sue that she put her forward for the Outstanding Apprentice of the Year award at the Birmingham Apprenticeship Awards, taking place later this month.

Maureen said: “I was impressed with Sue’s positivity, determination and her commitment to completing the programme and getting tasks completing, whilst she had a lot going on in her personal life. I felt she needed to be recognised.

“Sue was an absolute pleasure to work with. She was very conscientious and committed to learning. With everything that was going on in her life, she remained focused, positive, met deadlines and continued to push herself. I could not have asked for a better student.”

She added: “Sue’s apprenticeship journey began as she was heading towards her 60th birthday. She was initially reluctant, believing apprenticeships were for 16-18 year olds and because she last studied over 20 years ago.

“But she accepted the opportunity, believing you should challenge yourself and face your fears.  She felt it was important to show everyone you can achieve anything you put your mind to, regardless of your age and situation.”

Annie Pamplin, senior learning and development business partner at Dignity, said: “We would like to congratulate Sue for her nomination for ‘Outstanding Apprentice of the Year’ at Birmingham Apprenticeship Awards. All of us here at Dignity wish Sue the best of luck at the awards later this month.”

Unfortunately Sue won’t get to attend a glitzy awards ceremony as the event is being held virtually because of COVID-19, but she and her Dignity colleagues, and the team at PTP, will be tuning in when the event is streamed live on 27 November.

PTP Training Ltd, which trades as Performance Through People, is an experienced provider of training contracts at employers across the region and is currently working in partnership with the Greater Birmingham and Solihll LEP (GBSLEP), through the Greater Birmingham Ladder initiative – a partner in the apprenticeship awards – to participate in a triage-style business service that supports apprenticeships during the economic uncertainty caused by the pandemic.

PTP Training Ltd is part of the BCTG Group, a West Midlands-based training organisation which supports almost 10,000 young people and adults each year.

The group has ten sites in Birmingham, the Black Country, Staffordshire and Newcastle-under-Lyme, and also includes The Apprenticeship Works, BCTG Ltd, Eurosource Solutions and Further Training.

Overall, the group offers 166 different types of apprenticeship, 84 different adult upskilling and reskilling courses and 27 pre-apprenticeship programmes for 16 to 18-year-olds. These include everything from healthcare and early years care to construction, engineering, manufacturing and logistics, through to business skills in IT, management and team leading.